So, I’m standing in the “20 or less” express line at my least favorite place to be – a WalMart Supercenter. The short, gray-haired woman in front of me has … let’s see, 19 items. (I guess I’ll count the two tubes of toothpaste as one.) The shorter, balding man behind me looks annoyed, so I flash him a smile. He still looks annoyed. (Maybe because he had to cuff his jeans to keep them from dragging on the floor? Or maybe because he’s expecting to cut in front of me and my cheddar cheese, salsa and Altoids?)
One of my biggest grammatical pet peeves in this universe is the use of “less” when someone meant “fewer.” I realize this is not going to change the course of events or even make a dent in anyone’s journey, but here’s the deal: Use “less” for nouns that cannot be individually counted. Use “fewer” for nouns that can be itemized and counted. For example, if I put less icing on the cake, I might consume fewer calories.

All items on the conveyer belt at Wal-Mart can be individually counted. So the sign should read “20 items or fewer.” I hope this annoys you next time you are at WalMart. I realize, of course, this will not be the ONLY thing that annoys you about Walmart. And yes, the correct word is “annoy,” not “irritate.”
A “pet peeve” is, according to most dictionaries, something that causes a particular and continual annoyance to someone. It is possible that I cause one of your pet peeves and vice versa! The noun “peeve” derives from the adjective “peevish,” which usually means “showing annoyance,” “ill-tempered” or “in a bad mood.”
I have plenty of pet peeves, many of which involve other people’s driving. Here’s a partial list. People who:
• do not know how to merge onto a highway. You know what I mean: they slow down (or stop completely!) in the merge lane.
• don’t know how to use their turn signals, either leaving them on for miles or never turning them on.
• cannot multitask but think they can, so they drive, talk on the phone or text, smoke, eat and drink while swerving across two or three lanes of traffic.
• double-dip food into a “community” bowl.
• smack their lips or suck their teeth while eating.
• say “to make the long story short” and then don’t.
• throw stuff out of their car windows.
• tailgate and then whip around my car, only to meet me at the next stoplight.
• still don’t know that ALL CAPS means you’re screaming.
• don’t notice a stoplight has changed (because they think they can multi-task) and cause me to miss getting through the light.
• put any sort of clothing on an animal.
• enter a store through the marked “Exit” doors and then frown at me because I’m exiting through the same doors.
• don’t end a texting conversation with some sort of obvious closing (GTG, TTYL, LY).
• are consistently and habitually late.
• don’t wave or (acknowledge in any friendly way) when I let them in traffic ahead of me.
• put me on speaker phone without asking/telling me.
• interrupt (for no apparent reason) me and change the topic of our conversation.
• say “I could care less” when they mean “I couldn’t care less.”
• do not take care of their feet/nails but still wear sandals.
Other miscellaneous pet peeves:
• shopping carts with wheels that are broken and/or out of alignment
• ugly, cheap flip flops
• speed bumps
• the Edmond Hyundai and the Norman Chrysler commercials
• greeting cards that play music, talk or otherwise make sound
• fake tans
• unkempt fitting rooms
• skinny and/or embroidered jeans on adult men
• a latté that contains a little coffee and a lot of foam
So, do you have any pet peeves? Let’s talk about them over coffee. Better yet, join me in the express line at Buy for Less, which features this hand-written sign: “20 items or so.” Nice way of handling it, don’t you think? 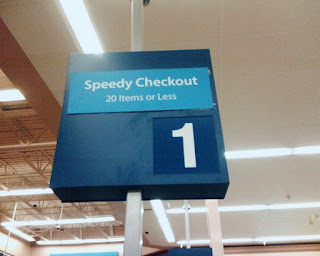