Life Lessons From A Jeweler

Everybody calls him “Mike.” His jewelry store doesn’t look anything like the glass chasm you may have fallen into at a high-end shopping center or three-story mall. (1: BREAK THE MOLD) It’s housed in a small, baby blue building adorned with Southwestern designs. There’s not a television jingle to help you remember the name of the place. There are no bright lights to make flawed diamonds look shinier. No one wears a suit. No one’s on commission. The store is closed Mondays and Tuesdays, because the jeweler has work to do and silversmithing classes to teach. And no, they’re not open on Sundays because that’s … well, that’s just wrong.
You are greeted by a family member (not necessarily human) at the door as you enter a world where jewelry speaks. Under the counters – rows of Indian jewelry – turquoise heaven. This store is a treasure chest of silver and gold. Sculptures, fans, pottery, blankets, flutes and lots of other items, many made by Oklahoma Native Americans, fill every space.
There really is only one path to this Oklahoma City oasis. I met Mike in that traditional way – through the friend of a friend. When I walked in, the small, unassuming man was standing behind a counter of shiny things that kept distracting me. (Seen the movie UP with the dog named Dug? “Squirrel!”)
“How can I help you?” Mike asked, his clear blue eyes peering over his glasses.
I told him I wanted to order a special ring – a mother’s ring. He pulled out a catalog similar to one I had seen at one of those annoying malls.
“There are some nice ones in here,” he said, smiling politely.
“Those are very nice,” I agreed. “But I’ve seen your work. I want you to design my ring.”
Mike’s smile widened. He put away the catalog and plopped a huge photo album on the counter. He showed me dozens of photos of the beautiful rings he had designed. (2: BE CREATIVE) He remembered details and could tell stories about the people associated with many of the rings. Suddenly, jewelry was personal. (3: ENJOY WHAT YOU DO)
The store’s web site describes him as the “house artisan and master jeweler and gemologist.” The web site needs another title behind Mike’s name: teacher. As we flipped through the photos, he continued my education in diamonds – explaining the attributes of diamond evaluation: clarity, color, cut, carat. We peered at diamonds under a microscope behind the counter (yep!). He explained the texture and hardness of various other gemstones and demonstrated durability by cracking his own ring against the glass counter. I learned the characteristics of Alexandrite, Malachite, synthetic opals and turquoise. (4: SHARE WHAT YOU KNOW)
He gave me options to help me order the ring I wanted without spending more money than I intended. (5: BE HONEST)
Then, he outlined his process of designing and creating a ring. He showed me several rings from his work area and explained the process of creating the mold, carving into the sides of the band and adding intricate details. Custom orders take weeks. There’s even a sign in the store reminding customers that whining and complaining are forbidden. (6: BE PATIENT)
My grandmother (dad’s mom) once told me that she never took her car to one of those quick-change oil places. “Why would you want to go someplace where they brag that they only spent 15 minutes on your car?” she said.
I really don’t know if good things come to those who wait. But I know for sure that good things are worth the wait.
Mike, I’ll try to keep that sixth rule in mind. But it would be nice to get that ring near my birthday. ;) 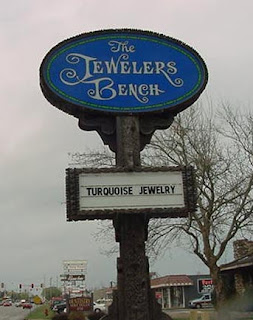