“Hey, look at me!” he said. His voice echoed like thunder in the quiet waiting room. Head nodding, I had been slowly sinking into that catatonic state brought on by beige walls, low fluorescent lighting and 1980s (non-hair band) elevator music. About a dozen other people were seated around the big room. Most of the six or seven female assistants behind the check-in desk were talking on phones. There were plenty of places to sit, but this guy had settled in comfortably about six inches from me on a dark brown fabric love seat.

Shouldn’t they be called “holding rooms?” Because your life is on hold.

He was tall, and his thick hair was one solid color – medium gray. Dressed in creased, dark blue Wranglers and worn leather cowboy boots, he was wearing a long-sleeved plaid shirt that snapped up the front. He had neatly folded a tan corduroy jacket – Tractor Supply, not L.L. Bean – on the left arm of the love seat. I guessed that he was in his early 70s.

Apparently, the waiting drives some people to steal the newer magazines. Everything here is from last summer.

Amused, I looked over at him.
He peered through his dark-rimmed glasses.
“Is that your real hair color?” he asked, loudly enough to make one of the assistants smile and two people look up from their magazines.
“Most of it,” I replied.
“What do you call that, dirty dishwater?” he asked. “My wife’s hair used to look like that.”
“Well I, I mean, I don’t CALL it anything,” I stammered. “Actually, I prefer to think of it as sort of blonde, but I …”
“You look just like my niece,” he interrupted. “She lives in Tulsa. I’m pretty sure she’s older than you, though.”

Why is it you never have to wait long to get the bill? Why do they take you back to the exam room, just so you can put on a flimsy gown and wait some more?

Stretching his long legs, he added, “I’m kind of worn out today. I worked out yesterday, and it takes two days to recover from that. It didn’t used to take that long.”

Now that I think about it, the StairMaster seemed a lot harder this morning.

I sifted through a stack of AARP, Better Homes & Gardens and Reader’s Digest and picked up a recent Rolling Stone featuring Stevie Nicks.

“Do you know what it’s like to be on a submarine?” he asked.
I looked over at him. He was staring across the room.

I’m pretty sure he wouldn’t count the Submarine Voyage at Disneyland. And honestly, I was the only nervous one. The kids were fine.

My personal space is a minimum of three feet, so getting into an elevator is an issue for me.

“They gave us two quarts of water for personal use. So, I brushed my teeth and washed my private parts every other day. Every time we came into a port, the first thing I did was to take a shower.”

This might be worse than the personal space issue.

“At least all of you smelled the same,” I commented.
“That’s true,” he laughed. “It was terrible! Anyway, I did something crazy and got married young. A sailor shouldn’t be married. Well, you know what I mean.”

He winked as his light blue eyes met mine.

I hope he didn’t think I was winking back. I get this uncontrollable eye twitch when I think about paying another medical bill.

“Anyway, all she wanted was that paycheck, and I couldn’t divorce her until I put in my 20 years. She didn’t think I would do it, but I did as soon as I could!”

Strangers talk to me all the time. They regularly approach me in Target and other places and ask where to find stuff. I know it’s because I look approachable, not because I look like I know what I’m doing. I always say, “Aisle 25.”

“So, you married again?” I asked.
“Yeh, 41 years ago. I married a girl that grew up across the street from me. It’s her house, and my home, and I like it that way. I mean, I let her do whatever she wants to the house because she takes care of it. It works for us. She made this appointment for me, and I’m OK with that.”
I smiled and started to ask another question, but he changed the topic.
“Are you from around here?”
“I’m originally from Arkansas,” I replied.
“My grandmother – I called her Nettie – was from Arkansas. She was in the Land Run when she was 9 years old. She was half Indian, but, hell, I don’t know which tribe,” he added, laughing.
“I didn’t find out until I was 40 years old that “Nettie” was short for her real name – Cincinnati.”
He took a breath, but it was a short one.
“My mother was an amazing woman too. She had eight boys, although the one just ahead of me died when he was a baby. My dad died of a heart attack when he was 31 years old, leaving mama with all us boys. We gave her a hard time.”
His voice got quieter, and he was looking away again.
“I asked her, why did daddy want so many kids? ‘It wasn’t your daddy’s fault,’ she told me. ‘I wanted a girl.’ ”
He smiled.
“She never had a girl, but all except one of her grandchildren are girls!” He said, laughing.
“Do you live near here?” I asked.
“Yes, we have a little house on 22 acres. We used to raise thoroughbreds. We raised some good ones, too, but we quit when we realized we had to choose between groceries and horse feed. But at our age – I’m 76 now – we spend a lot of our time waiting in places like this.”

I know what you mean.

He sighed, but it was obvious he was just stating a fact, not looking for sympathy. A young woman carrying a clipboard stepped from behind a door and called his name.
“Are you ready sir?” she asked.
He got up quickly and headed toward the door.
“Why, yes ma’am. I’ll follow a pretty blonde anywhere,” he said, grinning. 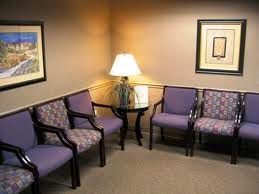