It was an ordinary school day, and we were sitting in the front cab of Dad’s pickup at the end of our long driveway. That was long before he was “Pops,” by the way. He was just Dad – or Daddy, if I needed something. I was 9 or 10.

We were waiting for the school bus and its dreaded bumpy, milk-run ride into town. That winter morning was dark and cold, and my big sister and I were slumping, bundled up just like Randy would be years later in “A Christmas Story.”

The truck was rumbling but hadn’t warmed up yet – and I was watching every breath float to the ceiling. We weren’t really alert or motivated enough for conversation, but Dad had the radio on, as usual.

I heard the opening nonsensical lyrics, “a-weema-weh, a-weema-weh” and straightened my back against the bench seat. Dad cranked the volume.

Within seconds, my sister and I were singing loudly with the contagious song, “In the jungle, the mighty jungle, the lion sleeps tonight…” Before the song had ended, Dad was singing with us. And not too shabbily.

I used to elbow him when we were standing up to sing in our small Baptist church. Invariably, we were working our way through the first, second and fourth stanzas. He would wink at me but still wouldn’t sing – just sort of mouth the words.

Now that I think about it, the only other song I remember hearing him sing was “Wasted Days and Wasted Nights.”

He knew I was the World’s Biggest Elton John Fan and would tease me incessantly about my teenaged obsession. One day, he was doing paperwork in his office, and I was hanging around the radio. On came the musical intro, “When are you gonna come down? When are you going to land? I should have stayed on the farm. I should have listened to my old man.”

Dad said, “Who is that? I like that song!”
“You have excellent taste,” I replied. My turn to wink.

It was years before I caught the irony of the song’s fourth line.

Dad was a hard-working guy and didn’t believe in allowances – but it was mainly because he didn’t want to have to remember how much and to whom he had handed out money. In any case, if I asked, he gave – gruffly handing over a five-dollar (or occasionally a ten-dollar) bill.

“Don’t spend it all at the record store!” he would admonish me. I always mumbled a reply, trying to avoid a white lie. We both knew it – come Saturday morning, I’d end up at the mall, sorting through the album bins.

My dad’s been gone for 19 years. I don’t remember anything I gave him for the 34 Christmases I knew him and only three of the words that I wrote inside his last Father’s Day card.

But distinctly, I remember climbing out of his truck more than 40 years ago.

And when I woke up on a recent June morning with that silly song in my head, the memory of an ordinary day with Dad was as heavy as the humidity. 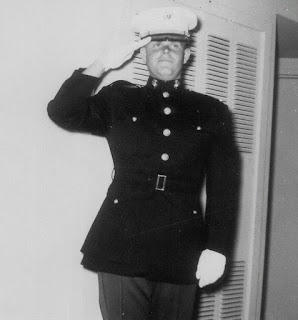